Fancy a curry night? Tikka Masala is a much-loved British classic, and it's easy to see why. Our Quorn version packs in all the flavour, but with fewer calories and less saturated fat. 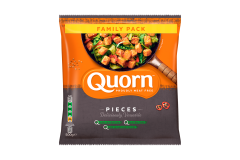 Made with Quorn Pieces

This indulgent vegetarian pot pie combines creamy camembert with fennel and chestnut mushrooms for a delicious,...

A rich, hearty meat free vegetarian chilli recipe packed with flavour. All the taste and kick of a classic chilli con...

For a tempting taste of Italy, try our delicious gluten free lasagne recipe with Quorn Mince. Fresh celery, onion and...

Try this quick spaghetti bolognese recipe, made with Quorn Mince, mushrooms, and onion in a delicious vegetarian...

Get creative and add Quorn Pieces to your chow mein for a delicious noodle dish. Enjoy your favourite meat free...