Skip to main content
Quorn
Quorn Vegan Pieces Mediterranean Socca 4.5 out of 5, 1 based on 2 ratings

Socca is a cross between a pancake and a flat bread, made from gram chick pea flour it is high in protein and fibre. 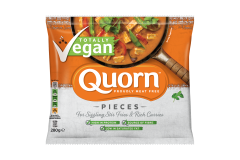 Made with Quorn Vegan Pieces

Bursting with flavour, this sticky sweet and sour Quorn Nuggets recipe is sure to go down a treat with the kids....

Try this quick spaghetti bolognese recipe, made with Quorn Mince, mushrooms, and onion in a delicious vegetarian...

A delicious, fragrant and nourishing Thai green curry recipe made with Quorn Pieces.

A delicious midweek feast that the whole family will enjoy. Simply simmer Quorn Sausages in a sharp shallots &...

Channel your inner chef and learn how to make homemade burgers with Quorn Mince. Enjoy your favourite meat free...